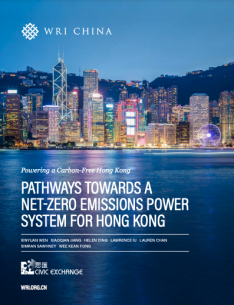 This Report is part of the within our Climate & Energy Program. Reach out to for more information.

This Report is part of the within our Climate & Energy Program. Reach out to for more information.

In November 2020, Hong Kong pledged to achieve carbon neutrality before 2050, making it China’s first city with a time-specific carbon neutrality goal. On 6th October 2021, the Hong Kong Climate Action Plan 2050 was published. It set an interim target of reducing Hong Kong’s carbon emissions by 50 percent before 2035 compared to 2005 levels.

The greatest potential for reducing emissions is within the power sector, which accounted for approximately 66 percent of Hong Kong’s total greenhouse gas (GHG) emissions in 2019.  In the newly released Climate Action Plan, Government committed to cease coal usage for daily electricity generation by 2035, as well as increase the share of renewable energy to 7.5–10 percent by 2035 and to 15 percent gradually thereafter.

This report is one of a number of sectoral reports under the Hong Kong 2050 Is Now initiative examining possible pathways to decarbonisation. It evaluates potential decarbonised power technologies and develops five energy-mix scenarios involving different technological combinations. These scenarios consider the economic, social, and environmental impact of building a decarbonised power system. Our recommendations can inform government planning in its pursuit of the mid- and long-term targets laid out in the Climate Action Plan.

We have found that a decarbonised power system with a high ratio of imported nuclear energy has economic advantages and can reduce power system emissions by 70 percent by 2035. In contrast, power systems with a high reliance on emerging technologies, such as CCS and hydrogen, face higher costs and deployment feasibility challenges. Ultimately, the future costs of these technologies will determine their long-term utility.

Hong Kong should, in a first instance, be proactive in scaling up domestic wind and solar energy, as well as expanding waste-to-energy facilities. Given its limited land area, Hong Kong also needs to enhance regional collaboration and import more low-carbon energy, such as nuclear and green hydrogen, to build a decarbonised power system.

WRI's 4 Expectations for the Climate Summit of Global Leaders

From Commitment to Action: Signs of Progress Since the Paris Climate Talks