China is experiencing the largest city-ward movement of people in human history. 700 million people have moved to the nation’s cities since the beginning of economic reforms in 1978. In that same time, the urbanization rate rose from less than a fifth to close to two-thirds today. This trend is expected to continue, as hundreds of millions more are expected to follow suit in the next decade.

The rapid pace and unprecedented scale of urbanization is reshaping the nation’s physical environment, creating opportunities and challenges for China’s sustainable development. The stakes could not be higher: How China develops in the face of continued urbanization will affect its citizens’ quality of life, access to services, social equity, national emissions and much more. Simply put, China’s own development prospects and climate commitments depend on making cities inclusive, equitable and environmentally sound.

Thankfully, much of this mass movement of people into cities was planned as part of China’s long-term development vision. It has already contributed in a big way to China’s increasing prosperity and the lifting of 800 million people out of poverty: Between 2000 and 2018, the urban population doubled and its GDP grew fivefold, 90% of which was contributed by cities.

China’s 14th Five-Year Plan and Long-Term Targets for 2035, published in April 2021, puts the transition toward people-centered and just urbanization at the heart of China’s strategic program for the next phase of the nation’s development. For the first time, it didn’t include a 5-year GDP target, in part to ensure that economic growth is considerate of ecosystems. It also quantified both a carbon intensity target and an absolute carbon emissions cap so that economic growth and social development do not further contribute to climate change. It also asks stakeholders to ensure and increase green job opportunities so that workers from traditional carbon-intensive industry and provinces can better adjust and transform.

The five-year plan represents an opportunity not just to advance climate goals, but to create better cities as urbanization continues. Here are five ways China’s Five-Year Plan can help steer the nation toward achieving a just transition and green urbanization:

Despite the rapid urbanization trend and growing number of people who live in cities, most of the urban population is underserved. This largely includes rural migrant workers, who contribute to one-third of the urban labor force as of 2019, but have much less access to core services in cities.

With mega cities expanding and new cities emerging, inclusive urban planning will be critical to close the gap between the rich and poor, particularly registered residents and non-registered migrants. Urban planning can achieve this by ensuring equitable access to services like land use, housing, sanitation, energy and transportation.

The five-year plan helps achieve this by relaxing, or even lifting, the long-existing household registration system (Hukou) in non-mega cities. The registration system identifies a person as a permanent resident of an area, which is required to affordably access many essential services like education and health care. Changes to this system is an important signal to the 285 million migrant workers in China who are not registered in the cities where they work, and therefore have limited access or affordability to core services.

On the policy side, the five-year plan asks governments to adjust social insurance and improve access to basic public services, compulsory education, housing security, medical care and sanitation. It also includes actions and policies for fiscal departments, such as requiring more funding and incentives to attract teachers and doctors to underprivileged areas. This will connect local budgets and incentive funds with actual rural migrant populations and their needs. Additionally, the five-year plan prioritizes urban renewal as the driving force for urban development, promising to renovate thousands of old communities in cities and towns.

Some advanced cities like Beijing and Shanghai are also building 15-Minute Community Living Circles as part of their local action plans following the national one. These “circles,” which refer to communities which provide all core services within a 15-minute walk, are becoming basic units for city planners to consider when renovating and regenerating cities. They offer great convenience in a mega city like Shanghai, where the population exceeds 27 million. Additionally, they are friendly to vulnerable people who don’t have access to cars, encourage startups and shops to open nearby in a systematic way, and help reduce emissions by avoiding unnecessary trips. 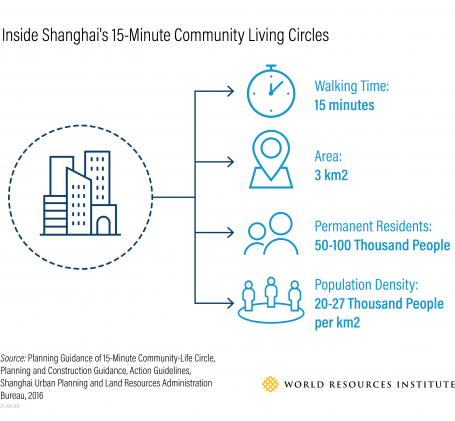 Public spaces and infrastructures are invaluable assets to all who live in cities, as they can reduce health risks and promote quality of life. Designing public spaces is listed at the top of the agenda for urban renewal and future development. Shanghai sets a good model in transforming old building complexes and public spaces to Instagram-worthy locations that benefit communities. Renovated sites such as the Xintiandi pedestrian street and Yu-yuen Street have benefited the city by increasing urban vitality and boosting commercial activities around streets. More access to green spaces can also increase residents’ physical activity.

Public spaces that are complete, democratic and safe are especially critical for the elderly and the young. Adults over 60 and youth under 14 years old together make up almost two-fifths of China’s total population. Both groups require spaces that are physically safe for them and accommodate their inability to drive, especially since up to 95% of road space serves cars and trucks.

The five-year plan details “the old and the young” projects to address aging and inclusiveness. This includes thousands of recreational parks, fitness centers, hospitals and nursery facilities for the elderly on national, regional and county levels. The plan also promises to carry out 100 child-friendly city adaptations, including extracurricular activity venues and community children’s centers. Shenzhen, Shanghai, Weihai, Wuhan and Chengdu have already adopted and officially published their own action plans for public spaces over the next three to five years.

Achieving urban sustainability and equity simultaneously is a major challenge. Green and people-centered development features prominently in the five-year plan, with five of the eight binding targets involving nature and green spaces. In particular, from 2021 to 2025, the plan outlines two targets: reducing energy consumption per unit of GDP from 18.2% to 13.5% and reducing CO2 emissions per unit of GDP from 20% to 18%. There are also targets for improved air quality, water quality and forest coverage. Nature-based solutions are highlighted for the first time because of their unique ability to help achieve these targets while improving urban development.

For example, the five-year plan pledges to improve city resilience against natural disasters and enhance coastline protection in Eastern China. In April, the Ministry of Finance, the Ministry of Housing and Urban-Rural Development, and the Ministry of Water Resources reviewed and selected 20 implementation pilot sponge cities to begin enacting these pledges. In the recent UN Biodiversity Conference held in Kunming, Yunnan, the Dapeng Peninsula in Shenzhen — which suffers greatly from frequent typhoon landings and storm surges — was selected as the pilot for national Ecologic-Oriented Development (EOD). WRI research dove into Dapeng’s climate risks, as well as the economic and ecologic benefits of building a climate-resilient coastline to protect the area.

China’s Ecological Conservation Red Lining Initiative is another project to ensure the most biodiverse places are off limits. The plan, together with the document published by the Ministry of Land and Resources and the Ministry of Agriculture, demands that 14 major Chinese cities set a specific boundary for their cities, which will prevent them from expanding at the expense of natural loss. The conservation of this natural space will help protect land, food and biodiversity.

Transport systems pose major problems for Chinese cities. In 2019, the transport sector was the second largest source of emissions, accounting for 9% of the country’s CO2 emissions. For individuals living in cities, the value of time lost to congestion-related travel delays are so long that in 2018 alone, Beijing lost about 180 million yuan ($27 million) on daily traffic commuting, the equivalent to about 6% of the city’s GDP. Therefore, transit-oriented development is important to reduce emissions, increase efficiency and address equity by providing multimodal accessibility.

National level support on transit-oriented development is increasing, including public transport planning and construction, public and private finance, and functional land use. The five-year plan promises to build an extra 3000 km of railways that connect cities and surrounding rural areas, as well as another 3000 km of urban public transit. Directing public finance to sustainable transport systems will make cities more accessible, convenient and safe for its residents and all who work within them. Through public and private partnerships, commercial, business and residential areas will follow these investments and can cluster around new transit nodes. Applying 15-Minute Community Living Circles, which are already under implementation in cities like Shanghai, will further improve equity and accessibility by bringing urban services within reach.

Buildings and construction are the main source of carbon emissions in China, contributing to 51.3% of all emissions in 2018. To address rapid urbanization, China’s policy has evolved from low-energy buildings to near-zero, and even net-zero, buildings to reduce urban emissions and reach the country’s newly-submitted nationally determined contribution. Since the 13th Five-Year Plan, there are 10 million m² of passive low-energy buildings completed or underway, which has boosted 10 billion yuan (about $1.56 billion) in economic benefits for the building energy efficiency industry.

The 14th Five-Year Plan has stepped further from green buildings, which have lower standards on emissions, to near-zero energy buildings, which can ensure a cleaner supply of energy. This will also reduce emissions, since at least 10% of generated energy is required to be renewable, and can save energy consumption by over 60%. This also means cleaner air and better conditions for human health.

The 2021 World Resources Report reveals a number of actions necessary to create equitable cities worldwide. While sector-specific approaches are a good start, they are not enough to unleash the full potential of cities, drive people-centered urbanization or meet the ambitious targets of China’s Five-Year Plan.

To fully achieve these targets, China will need:

The 14th Five-Year Plan sets a good start for cities to take ambitious actions and move toward net-zero, resilient and inclusive urban spaces. With limited time, governments and city leaders need to work out detailed actions to achieve not only the plan, but China’s greater climate and development goals.

Biking Provides a Critical Lifeline During the Coronavirus Crisis

How Will COVID-19 Affect Urban Planning?