Toward Net Zero Emissions in the Road Transport Sector in China

Road transport accounts for 70% of the transport sector’s emissions in China. Compared to the aviation and maritime sectors, the road transport sector is relatively easy to decarbonize and enjoys new opportunities such as vehicle electrification. There is momentum in China focusing on a “fossil fuel ban” as the main driving force to achieve net-zero emissions by 2050. 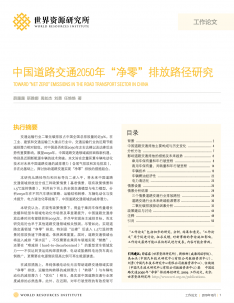 Road transport accounts for 70% of the transport sector’s emissions in China. Compared to the aviation and maritime sectors, which are traditionally difficult to decarbonize (Davis 2018), the road transport sector is relatively easy to decarbonize and enjoys new opportunities such as vehicle electrification. There is momentum in China focusing on a “fossil fuel ban” as the main driving force to achieve net-zero emissions by 2050.

This research aims to quantify the emission reduction potential of vehicle electrification and what role integrated measures such as mode shifts in passenger and freight transport, fuel economy standards, and urban planning can play in China’s efforts to attain net-zero CO2 emissions in the road transport sector.

The study concludes that although findings of the existing studies bolster the result from the “reference’ scenario, the ‘current policy’ scenario, which better captures future policy pathways and emission trajectories, indicates a different possibility. As predicted in the ‘current policy’ scenario, thanks to the electrification of light-duty vehicles and the slowdown of car ownership growth, emissions from China’s road transport sector will likely peak in 2035, earlier than the existing studies.

Although a sector-wide early peak of CO2 emissions is possible, the transitions outlined in the ‘1.5 degree’ scenario are hard to deliver. After the emission peak — particularly in terms of ‘low lying fruit’ - are reaped, efforts to mitigate the road transport sector will have to reach higher. To deeply decarbonize the sector, China needs to not only seek aggressive measures such as fossil fuel bans on light-duty vehicles, but also tackle a harder-to-decarbonize mode —heavy-duty freight vehicles - by shifting road freight to waterways or railways, or banning fossil fuel vehicles. Furthermore, as vehicle electrification takes off, a higher proportion of renewable energy sources in the power sector will become necessary.

Furthermore, the research shows different decarbonization measures have varying effects over time. In the near term, measures such as urban planning that lowers vehicle mileage are effective; yet, these mitigation effects will diminish as more vehicles become electrified. In the long run, measures such as decarbonizing the power sector will become increasingly important as mentioned before.

None of the emissions pathways outlined in this study is possible. Future actions taken by the Chinese government will be decisive in determining which pathway is followed, yet it is vital that it acts early to avoid the “lock-in effects” of transportation and power infrastructure.