This Report depicts an ambitious vision for China to achieve deep decarbonization by 2050, focusing on the policy options for low-carbon transition during the "14th Five-Year Plan" period. It also discusses the feasibility of early peaking in advanced regions and puts forward policy recommendations to inform national and sub-national decision-making. 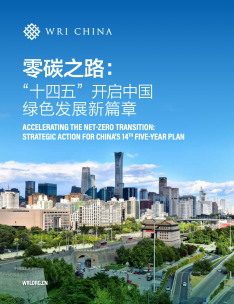 WRI recommends that China consider the following measures for a better low-carbon development in its 14th Five-Year Plan: establishing more ambitious climate and energy targets, formulating a long-term road map with an action plan to achieve 2030/2060 climate targets, push developed areas to peak their emissions within the next five years and accelerate green investment.

Incorporate more ambitious climate and energy targets in line with the 2030/2060 targets. Our report recommends that during the 14th Five-Year Plan period, China should incorporate climate change targets in its economic and social development plans as well as its special sector plans.

Encourage early peaking in key economic regions. China should encourage more-developed regions, such as the Yangtze River Delta region, Beijing-Tianjin-Hebei region, and Guangdong–Hong Kong–Macao Greater Bay Area, to peak their GHG emissions by the end of the 14th Five-Year Plan (2025).

Enhance bottom-up actions and continue to support low-carbon pilots. Provinces and cities should be required to formulate long-term climate strategies and establish short- and middle-range goals and action plans, including achieving emissions peaks as early as possible.

Accelerate renewable energy development. In China’s energy sector, the cap mechanism should switch from energy consumption to fossil energy consumption. On the demand side, the government should take multiple measures to promote the consumption of renewable energy and strengthen the regulations for minimum guarantee purchases. On the supply side, the governments need to continue to promote distributed energy systems during the 14th Five-Year Plan period, especially in the eastern and central regions with concentrated loads.

Build back better. China should not only embrace a new 5G-based infrastructure campaign as a short-term economic stimulus measure, but it should also use it to accelerate emissions reductions in industry, energy, transport and other fields. It will be particularly critical to avoid the development of carbon- and energy-intensive infrastructure projects, such as coal-fired power plants and coal-to-chemicals facilities, as part of the economic recovery.

As the world’s largest emitter of greenhouse gases, China has a crucial role to play in tackling the climate crisis. Fortunately, China is signaling that it is taking this challenge seriously with President Xi Jinping’s recent announcement that China aims to peak its emissions before 2030 and reach carbon neutrality before 2060.

New analysis by WRI finds that China can peak its carbon emissions as early as 2026 and get on track to achieving President Xi’s vision for carbon neutrality while generating nearly $1 trillion in net economic and social benefits in 2050. To realize this vision, China must focus on four key priorities during the next five years: transitioning to cleaner sources of electricity; improving industrial energy efficiency; electrifying the transportation sector; and accelerating the removal of carbon dioxide from the atmosphere using carbon capture methods.  Scaling up plans to curb non-CO2 greenhouse gases are also necessary, as are efforts to phase out coal power.

Strengthened climate policies will also reduce particulate emissions, which could improve air quality and help prevent the premature deaths of up to 1.89 million people by 2050—a benefit of $240 billion in avoided health impacts. Over 30 years, China can also expect to generate cost savings of $530 billion in fuel, operation, and maintenance expenditures and avoid $445 billion in climate damages.

WRI's 4 Expectations for the Climate Summit of Global Leaders