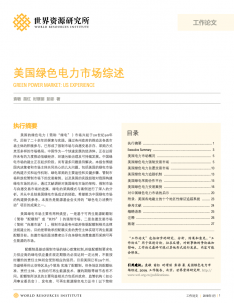 The U.S. green power market emerged in the 1990s and has experienced exploration and practice for more than 20 years. Through promotion of state governments and active participation of market players, a market structure has emerged with flexible procurement methods in which compliance and voluntary markets coexist. As a fast-growing economy, China is trying to promote low-carbon economy and sustainable development with unprecedented efforts. The construction of China's green power market is still at a nascent stage and there are many problems that need to be solved. Several major issues that concern the domestic policy makers and market players include: (1) How is the U.S. green power market organized and operated? (2) What are the main approaches and key steps for green power procurement? (3) What are some of the noteworthy procurement cases in regulated and deregulated markets respectively? (4) What lessons can China learn from the U.S. experience? This working paper first provides an in-depth analysis of the structure and the status of both compliance and voluntary green power markets in the U.S. This is followed by an overview of the green power procurement mechanisms, along with two case studies. It last summarizes the experience of the U.S. green power market to inspire Chinese policy makers and market players on green electricity market design and deal organization. This working paper is one of the output from the “Green Power Consumption” project, which was supported by Energy Foundation.

There are two main types of green power market in the U.S. One is the compliance market (or the mandatory market) based on the Renewable Portfolio Standard (RPS), and the other one is the voluntary market. Compliance markets are constructed by governments in certain states in accordance with RPS regulations in order to help compliance entities - such as electricity utilities, to meet compliance requirements, while voluntary market is driven by consumer preference for renewable energy.

In addition to government and market entities, some programs and organizations initiated by government agencies and NGOs are actively promoting green power procurement. The Green Power Partnership (GPP), the Renewable Energy Buyers Alliance (REBA), and RE100, for example, have been advocating social cooperation to promote clean energy development and these programs have provided a broader platform for corporate green power procurement.

At the end of the report, we summarized some lessons from US experience, in the hope of providing some inspirations for Chin’s nascent green power market.

State legislation provides a legal guarantee for U.S. compliance market, which is characterized by the legislative adjustment based on local conditions. The “Renewable Energy Law” implemented in China mainly focuses on increasing the supply of renewable energy in upstream market and improving the energy structure, while no binding mechanism in the downstream market to ensure renewable energy adoption. We suggest that the RPS should be prioritized in the next revision of "Renewable Energy Law."

Penalty mechanism is an integral part of the U.S. compliance green power market with alternative compliance payments usually invested in new renewable energy projects. The RPS to be implemented in China has been discussed and updated several times, the penalty mechanism also differed a lot in different versions. Comparing to previous versions, the latest released RPS consultation draft weakened the penalty measures. If obligated entities failed to implement renewable obligation, they will be listed in bad credit file and get punishment. However, clear and specific penalty measures are absent, bringing high uncertainty of the effect of RPS implementation.

There are two ways to track green power transactions in the U.S. – one based on RECs and the other on procurement agreements. Either method can assure a clear and unique ownership of green power products. At present, China has established a REC tracking mechanism in the voluntary market. Since secondary market for REC trading is not open to the public, the requirement for tracking system is not very strict. Given the mandatory RPS to be implemented in China soon and the prospect of opening the secondary market in REC voluntary trading, the current tracking mechanism must be strengthened and optimized in advance.

The structure of the voluntary market in the U.S. is clear and flexible. Diversified green power supply and purchase channels have further expanded the green power market and meet the different needs of various customers. Compared to the U.S., flexibility in the Chinese voluntary market is relatively low, and end users usually do not possess that many options. A new round of China's electricity system reform with the goal of marketization was initiated three years ago. A platform for market-based transactions has been established. We propose that more purchase channels and more purchasing options should be developed for green power consumers in China.

In the U.S., it is both corporate social responsibility and economic interest that motivates and drives companies to purchase green electricity voluntarily. On one hand, companies gradually assume the responsibility for energy saving, emission reduction, and socially sustainable development through the procurement of green power. On the other hand, the cost of renewable energy has experienced a substantial reduction, and long-term power purchase agreements allow companies to hedge the risk of future energy price fluctuations in the long run. At present, the slow progress of China voluntary green power purchase is caused by mainly two concerns of end consumers: first, the possible increase in energy cost due to green power procurement; second, the lack of incentives for companies to purchase RECs due to its high costs and non-transferability. If China takes advantages of the rapid decline in the cost of renewable energy, especially wind and solar, and allows voluntary REC market to open for all green power programs, it is expected that REC price would decline significantly. If the electricity subsidy is decoupled from the price of voluntary REC, the price of voluntary REC may be comparable to or even lower than that in the United States. If the voluntary procurement of green power is gradually linked to the green certification and tax credits, the environmental awareness and social responsibility of companies can be improved. The enthusiasm of companies for purchasing green power will also be strengthened.