China's green power market is still under development. There are concerns among power consumers in terms of available options to procure green power, and the pros and cons of these options. This handbook analyzes three major methods for corporate green electricity procurement. 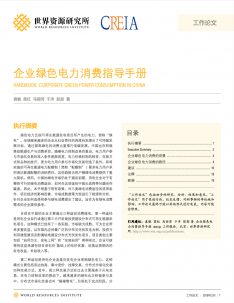 In the broad sense, green electricity refers to clean electrical power generated from renewable sources. A rising number of companies around the globe have set their own sustainable development goals as a gesture of showing social responsibility. An important method to fulfill such goals is to increase the share of green electricity in total power consumption. China has also been promoting energy revolution on both supply and demand side. The restart of Power Sector Reform also brings new opportunities for cooperate green power purchase. The lowering threshold for market entry and the shift toward a market pricing mechanism are both lifting the barriers for companies in their participation in the distributed transaction market. In addition, the renewable portfolio standard system will be launched stepson, requiring obligated entities to adopt a certain percentage of green power. These global and domestic trends are creating unprecedented opportunities for end-use green power purchase in China. However, China’s green electricity market is still under construction, thus concerns occur among commercial power consumers in terms of possible options to procure green power, and the pros and cons of these options. As such, this handbook is going to examine and compare three major methods of corporate green electricity procurement under current policies, so as to make suggestions for companies regarding how to participate in green power consumption.

Currently there are mainly three options for power user companies to procure green electricity in China. The first one is to invest in distributed renewable energy projects, which has now developed the most mature market. Companies can adopt a “self-generation and self-consumption” mode by constructing on-site power generation projects either independently or through third-party developers. Profits come from various sources, including feed-in-tariff, saved expenditure that is otherwise spent on purchasing electricity from the grid, and in many cases, income from the surplus power fed to the grid. Take distributed photovoltaic power projects as an example. Corporate investors can utilize the rooftops of their company buildings to construct distributed PV power generation projects, and use the electricity generated for either “self-consumption, surplus feed-in grid” or “full self-consumption”.

The second option is to directly purchase electricity generated by renewable energy. This option mainly involves four means of transaction: bilateral negotiation, centralized bidding, listed transaction, distributed market transaction. The first three means were mainly used in thermal power trading, while with the progress of power sector reform, more and more green power producers are going to participate in these transactions. The fourth means involves companies buying excess power from their neighbor’s small- or medium-scale renewable sources via distribution lines. In this case, power grids are responsible for transmitting the electricity, and will only charge a certain amount of “network fee”. Distributed market transaction further includes three modes of operation: direct transaction, commissioned transaction, as well as full acquisition and distribution by the power grid. Among these three modes, direct transaction yields the highest profits. Distributed market transaction is now still in the pilot phase, and is developing slowly due to the reluctance of power grids whose profits will be affected. If this obstacle could be overcome, corporate green power purchase would see new opportunities.

The third option is to purchase Green Electricity Certificates (GECs). China had launched its first voluntary trading platform for GECs in July 2017. Certificates are awarded to renewable energy generators such as onshore wind farms, solar power plants (excluding distributed solar generators). Transactions can be made through bilateral negotiation or centralized bidding, and the final price should not exceed the feed-in-tariff. However, GECs sold through the voluntary platform are not bundled with the physical delivery of electricity to buyers, and the price of certificates is at a high level, which resulted in a quiet market of GECs. New opportunities could lie in the renewable portfolio standard (RPS) system that is expected to be officially initiated in 2019. NEA has released three versions of consultation draft of RPS in 2018. This system requires obligated entities to include a certain amount of renewable power in its energy portfolio, which could increase the demand for GECs.

Considering the characteristics of the existing three green electricity procurement approaches, we recommend that corporates with green electricity consumption to take following decision steps to select the approach:

1)    First of all, for power consumers who are qualified for investment in distributed renewable projects by themselves or by third parties, option one might be the first priority for green power procurement. Taking financial condition and expertise into account, power consumers can either invest in the projects by themselves or invite a third party to invest in the projects and sale them green electricity at a discount.

2)    Secondly, for enterprises lack of conditions or resources for investment, we suggest them procure green electricity through bilateral negotiation, centralized bidding, or listed transaction, depending on the products provided by power transaction centers. In addition, peer-to-peer trading of distributed generation is in the pilot stage. It is recommended that enterprises keep an eye on the latest trend and explore cooperation with Integrated Energy Service Providers and power suppliers.

3)    Finally, purchasing green electricity certificates is the easiest way for enterprises to meet their goal of green power consumption. While the price of GECs is set according to the subsidy intensity, it’s still quite expensive. With continued decline of renewable energy cost, if the price of GECs decouples with subsidy intensity, GECs will be more economic attractive.