In 2017, World Resources Institute officially launched an open data platform, Performance Tracking of China’s Climate Actions 1.0, to track the progress of national goals on mitigating climate change. The platform tracks and updates data in a timely manner, in order to improve availability of climate change related data. This Technical Note elaborates the methodology and data sources used to track each goal, to better assist readers in understanding the contents of platform. 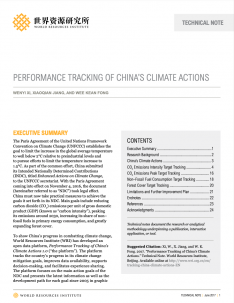 The Paris Agreement of the United Nations Framework Convention on Climate Change (UNFCCC) establishes the goal to limit the increase in the global average temperature to well below 2°C relative to pre-industrial levels and to pursue efforts to limit the temperature increase to 1.5°C. As part of the common effort, China submitted its Intended Nationally Determined Contributions (INDC), titled Enhanced Actions on Climate Change, to the UNFCCC secretariat.With the Paris Agreement coming into effect on November 4, 2016, the document (hereinafter referred to as “NDC”) took legal effect. China must now take practical measures to achieve the goals it set forth in its NDC. Main goals include reducing carbon dioxide (CO2) emissions per unit of gross domestic product (GDP) (known as “carbon intensity”), peaking its emissions around 2030, increasing its share of non–fossil fuels in primary energy consumption, and greatly expanding forest cover.

To show China’s progress in combatting climate change, World Resources Institute (WRI) has developed an open data platform, Performance Tracking of China’s Climate Actions 1.0 (“the platform”). The platform tracks the country’s progress in its climate change mitigation goals, improves data availability, supports decision-making, and facilitates experience sharing. The platform focuses on the main action goals of the NDC and presents the latest information as well as the development path for each goal since 2005 in graphic form. The platform also tracks China’s progress in its goals related to CO2 emissions, non–fossil fuel consumption, and forest cover established in the 12th and 13th Five-Year Plans.

All data in the platform is public data or is calculated based on public data. Carbon dioxide emissions data are calculated based on open energy consumption data and include only emissions from fossil fuel combustion. The outcomes of WRI calculations may differ by 1-2 percent from National Inventory data and are for reference only; they do not represent official information. WRI will continue to improve data sources and corresponding calculation methods as it further develops the platform. We also will incorporate more topics and functions. For example, we will add a blog to publish in-depth analysis of issues related to climate change.

According to our analysis of data for the period 2010–2015, the rate of decrease in China’s carbon intensity of GDP, the proportion of non–fossil fuels used in primary energy consumption, the forest stock volume, and the forest coverage rate all progressed to meet the 2015 goals set in the 12th Five-Year Plan. Going forward, we will continue to track the NDC goals for 2030. Furthermore, our analysis indicates that, if the slowdown in China’s GDP growth rate accelerates (that is, GDP grows more slowly between 2017 and 2030 than it did in the previous decade), CO2 emissions could peak earlier and the inflection point could be achieved by 2030.

This technical note is a supporting document for the WRI platform. It elaborates upon the methodology and data sources used to track each goal and analyze the tracking results to better assist readers in understanding the contents of the platform. The objective of the platform is to provide useful data and information to help the country, provinces, and cities of China reach their emissions peak at an earlier date, with a lower overall peak level.

China’s Climate Action: Looking Back, and Looking Ahead to the 13th Five-Year Plan