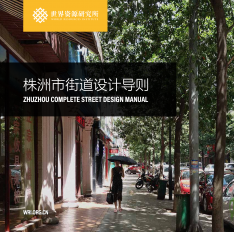 Streets are at the center of urban life. Streets consist of a small fraction of urban spaces, but they play a vital role to facilitate urban mobility, social interactions, and economic vibrancy. Although in China, the concept of “complete street” has been adopted in a few Chinese cities, it has yet been mainstreamed in small- and medium-sized Chinese cities. Given the unique spatial characteristics of these small Chinese cities, designing complete streets requires contextualizes solutions. The manual sets a local baseline for Zhuzhou—a small-sized Chinese city to design streets and public spaces while redefining the role of streets in the urban redevelopment and economic transformation context.

Streets are at the center of urban life. Although streets consist of a small fraction of urban spaces, well-designed urban streets play a vital role to facilitate urban mobility, social interactions, and economic vibrancy. The concept of “complete streets”, therefore, emerges to ensure urban streets can measure up to these purposes, while reversing the traditional car-centric way to define urban streets.

Chinese cities have increasingly embraced the notion of “complete street.” The second Central Urban Work Conference convened in 2015 ushered in a paradigm shift in China’s urban transformation: the traditional practice of car-dependent, ad-hoc urban expansion was scrutinized, and the redevelopment of low-quality urban areas was underscored. Renovating of urban public spaces and streets have become a vital instrument of the urban redevelopment efforts to restore cities’ vitality, characters, and human dimensions.

Consequently, the concept of “complete street” has been slowly trickled down to a few Chinese cities. However, the adoption is limited to only first- and second-tier Chinese cities that are commonly featured by boulevards and super blocks. A critical mass of cities—especially small- and medium-sized cities has not yet been exposed to the concept. Smaller Chinese cities part way from large cities, with smaller urban footprints, broader street typology, narrow alleys, and unique landscape characters (such as hilly terrains and river views), thereby requiring dedicated solutions.

Located in Hunan Province, Zhuzhou houses 1.24 million residents, with a built-up area of 145 square kilometers. The city exemplifies a typical third- and fourth-tier city in China in term of the spatial scale, the human-scale urban fabric in traditional neighborhoods, to the natural environment such as mountains and rivers.

Outgrown from a historic industrial city, Zhuzhou is making great efforts to displace heavy industries while maintaining economic growth. Urban design of the streets and public spaces can play a supporting role amid this economic sectoral shift. Although the city’s traditional commercial blocks and residential neighborhoods have pleasant human scales, the vitality and quality in the urban center are gradually declining after the relocation of industries and the employees. Furthermore, rapid motorization has taken a toll on the livability of the city. Street designs and renovations that prioritize private vehicles not only clog traffic, but also divide the city by deterring street-front’s shopping consumption and social interactions. However, still, 78% of urban residents in Zhuzhou move around by walking, cycling, and taking public transit. As the city’s infrastructure investment shifting from building highways and expanding major roads, to renovating minor streets and back alleys, a paradigm shift in both mindsets and design ordinance in Zhuzhou is in order, to create human-oriented streets and quality public places that support the city’s economic transformation efforts.

The manual is developed, first to build a common vision across different government departments and the public for the redefined role played by streets in Zhuzhou: streets do not play the sole function of enabling connectivity for the vehicular traffic, but also facilitate an enabling environment for walking, cycling, taking public transit, doing business, and socializing. It is an essential policy lever for urban redevelopment and economic transformation.

To break away from the traditional engineering approach to an urban public space design practice, the manual also operationalizes the complete street design, by establishing design principles, offering example street layouts for different street types, and revising the control parameters for each street elements (such as intersections). Urban design codes for street-front buildings and facilities are also treated as an integral element of the complete street design. Some of the revised control parameters and design codes are also institutionalized into “Zhuzhou Planning and Management Technical Ordinance” to enforce the compliance.

Additionally, implementation recommendations such as multi-stakeholder engagement, public participation, construction phasing, and operation & maintenance are covered by the manual.

From China to Colombia, 5 Cities Making Streets Safer by Design

New Mobility is Coming to a City Near You – But Will It Be Sustainable?