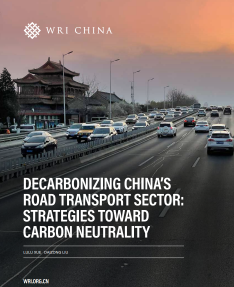 This Report is part of the within our Sustainable Cities Program. Reach out to Yuzi Zhao for more information.

This Report is part of the within our Sustainable Cities Program. Reach out to Yuzi Zhao for more information.

China’s road transport sector plays an important role in meeting carbon early peaking and carbon neutrality goals. This study examines how the sector might be decarbonized by modelling five scenarios using the LEAP model. The results indicate the following:

First, in the medium term, the peaking timeline for GHG emissions from China’s road transport sector would be during 2025–35 and that for petroleum demand would be during 2024–30 under all scenarios except Business as Usual. If the country’s stated policies are effectively implemented over time, China could peak road transport emissions before 2030 and petroleum consumption before 2027. The peaking timeline could be further advanced to 2025 for GHG emissions and 2024 for petroleum consumption by employing structural change measures.

Second, over the long term, with policy interventions, it would be possible to reduce road transport GHG emissions in 2060 by 50–95 percent from 2020’s level. To achieve the largest emission reduction potential of 95 percent, vehicle electrification, structural changes, fuel efficiency improvements, and power and hydrogen decarbonization are critical. Further, unlike GHG emissions, after the introduction of the China 6 emission standard, road transport’s air pollutant emissions would decouple from GHG emissions trajectories, showing a steady declining trend.

Fourth, the modeling results also show that low-carbon investments amounting to 39–83 trillion CNY cumulatively are needed from 2020 to 2060 to decarbonize China’s road transport sector. The investment demand is the largest from now till 2035 and will steadily decline over time. Structural changes are the least-expensive measure among all the decarbonization measures because a smaller vehicle fleet size reduces needed investments in installed capacities for power and hydrogen generation and transmission as well as investments in vehicle acquisition and charging (and refueling) infrastructure expansion.