In the context of drafting the 13th Five Year Plan and China’s New Type Urbanization Development, this report summarizes the practices of low-carbon programs in Chinese cities and provides a guideline for low-carbon city development planning that suit the unique situation of Chinese cities. This Manual focuses on introducing domestic and international experiences in low-carbon city development, including background, concept, position and progress. 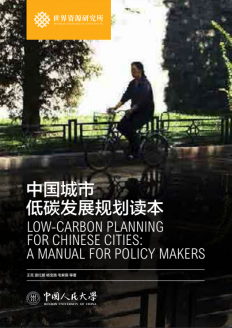 Cities are not only the main consumers of energy and sources of greenhouse gas emissions, they also play a key role in improving energy efficiency, driving low-carbon in manufacturing and living as well as innovation in new low-carbon technologies. The considerable land mass and huge population of China means that national strategies and policies must be allocated to provincial and even city levels before they can be effectively implemented. The vast majority of economic activity in terms of investment and consumption also happens in cities. Therefore, cities are key considerations in China’s implementation of national strategies and policies on climate change and energy.