This report analyzes the future power demand and assesses the distributed renewable energy potential in Jiangsu, Zhejiang, and Shanghai. Based on the results of the potential assessment as well as the analysis on future energy demand, this report draws a preliminary development vision of the distributed renewable energy in Jiangsu, Zhejiang, and Shanghai. Moreover, this report proposes several policy recommendations regarding of current problems. 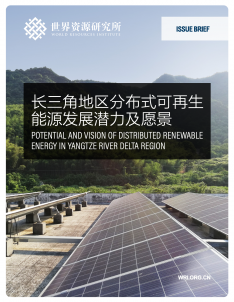 This Issue Brief is part of the within our Climate & Energy Program. Reach out to for more information.

This Issue Brief is part of the within our Climate & Energy Program. Reach out to for more information.

At the General Debate of the 75th Session of the UnitedNations General Assembly in September 2020, China announced that it aimed to achieve carbon neutrality before 2060. In the subsequent Climate AmbitionSummit in December, China announced some further commitments for 2030 Nationally Determined Contributions (NDCs), including increasing the share of non-fossil fuels in primary energy consumption to around 25 percent and bring its total installed capacity of wind and solar power to over 1.2 billion kilowatts.These goals have not only boosted global confidence in addressing climate change, but also pointed out the direction for domestic low-carbon transformation.

The greenhouse gas emissions from the global energy sector account for 73% of the total emissions. Therefore, deep emission mitigation in energy sector is crucial for achieving climate goals. As the technology of renewable energy improves and its cost falls, distributed clean energy is becoming a significant part of the energy transition. The Yangtze River Delta region encompasses intensive industries and a large population. The energy consumption there presents characteristics of a big total volume and carbon intensive structure. The high-quality development of the

Yangtze River Delta means a transit toward the green and low carbon economy, which must be powered by a clean, low-carbon, safe, and efficient energy system, and maximize the development and utilization of local renewable energy.

On a global scale, decentralized wind power and distributed solar PV are two main application modes of distributed renewable energy. Decentralized wind power emerged in Europe, especially in Denmark and Germany where technology and business modes have been mature. As of the end of 2018, wind power in Denmark connected to the distribution network with voltage of 20kV and below accounted for over 80%, and in Germany, over 90% of onshore wind farms has less than 9 wind turbines, mainly connected to the distribution network of 36kV or 110kV. The success of decentralized wind power in Denmark and Germany mainly relies on a flexible power grid system and a mature power trading market. In addition, Denmark and Germany have rich experience on community wind projects, especially on engaging residents, lowering costs, and diversifying returns. Germany also leads the world in distributed solar PV. In order to support small-scale PV projects, the German government retains a 20-year fixed subsidy for PV projects with installed capacity below 100 kW. Policy banks also provide small-scale PV projects with low-interest loans to reduce financing costs. Moreover, the government offers additional subsidies to matched energy storage facilities to encourage self consumption of distributed solar power.

In terms of decentralized wind power, we did the potential assessment based on wind resource and land availability, we also aggregated the potential in different application models including industrial parks and villages. The result shows that the development potential of decentralized wind power will be 32.6GW to 82.7GW. In that region, distributed solar PV and decentralized wind power together can meet 48% to 69% of the incremental energy demand by 2035. However, under the existing distribution network structure and the operating mode, the adoption capacity of distributed system in this region is much less than its development potential. Thus, it is necessary to strengthen the construction of distribution network and optimize the dispatching and operating system as soon as possible.

Based on the results of the potential assessment as well as the analysis on future energy demand, this report draws a preliminary development vision of the distributed renewable energy in Jiangsu, Zhejiang, and Shanghai.